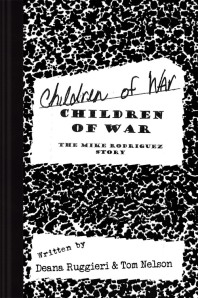 Having endured the wrath of his parents, the child welfare system, homelessness, addiction and numerous incarcerations, Mike Rodriguez knows hell firsthand. Mike’s salvation arrives in the form of a journal and a pen, the means to record the horrors of his lost childhood and to somehow make sense of his place and purpose in the world. In his primitive scrawl, Mike writes not just to save himself but to share his story with young adults in the hope that it will save others like him from a similar fate.

Formatted like the mottled composition books Mike writes in so diligently, CHILDREN OF WAR is told through Mike’s hand-written journal entries, transcribed videotaped interviews, Mike’s personal effects and artwork of at-risk teens he counseled, and remembrances of those who knew him. Over time, the attractive and charismatic Mike discovers sobriety and spirituality, love and a mission in life as he tirelessly works the streets of Los Angeles’ Skid Row to assist those whose downward spiral he understands all too well. Mike also confronts his own racism, reunites with his estranged brother, makes a movie with a rap star and wins the lottery as he battles to deal with his demons and to control his rage. Does he succeed? For a while… And if one struggling victim of abuse reads CHILDREN OF WAR and seeks help, Mike’s dream to make a difference will have come true.

A portion of each sale of Children of War: The Mike Rodriguez Story is dedicated to a scholarship fund in Mike’s name to help youth achieve their personal and academic goals.